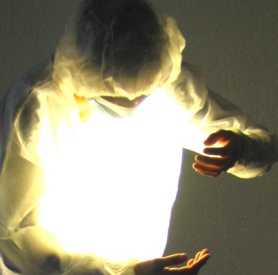 CLEAN was created as part of an Artist Residency Commissioning Program at CounterPULSE, an incredible space for emerging artists in San Francisco.  We shared the bill with co-Artist in Residence Brittany Brown Ceres and Dance Ceres.

A multi-media performance piece, CLEAN deconstructed Silicon Valley’s self-perception through an investigation of its numerous toxic Superfund sites.  For many in our nation, Silicon Valley is a nearly mythological place-home of the brave new virtual world of computing and telecommunications, and a cradle of “clean” industry.  This mythology is equally powerful for the valley’s own residents, whose lives are intimately intertwined with these high-tech industries.

In reality, however, this mythology resolutely ignores the environmental costs of electronics product manufacturing. Shockingly, our own Santa Clara County has more toxic EPA Superfund sites than any other county in the nation. Despite its propaganda about increased access through technology, Santa Clara County’s tech employment patterns also play out traditional racial and gender inequalities.

For our initial foray into these ideas, we used two stories ripped from the headlines:  Hans Reiser, a highly-regarded Linux developer in Oakland who was on trial for the murder of his wife; and Fernando Jimenez Gonzalez, an 18-year old worker at a PC board manufacturing company in Redwood City, found dead after falling in a vat of sulfiric acid.

Related Blog Posts: Letter to Mr. Daisey, the genius defense, back from the ‘moon