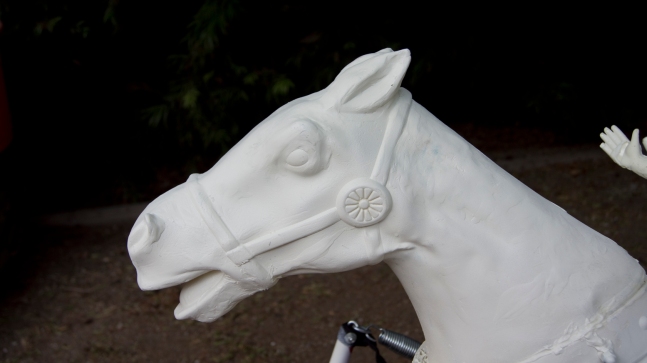 An installation created for High Desert Test Sites, my Doomsday Crèche, installed in Kingman, Arizona, are sculptural tableaux modeled on traditional nativity displays, but instead portraying a scene from the apocalyptic Book of Revelations in the New Testament, specifically Revelations 6: 1-8.  The project was installed on October 14, 2013.

I wrote about the project in baumtest quarterly, issue #3. 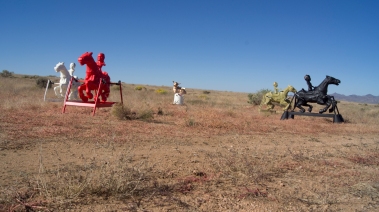 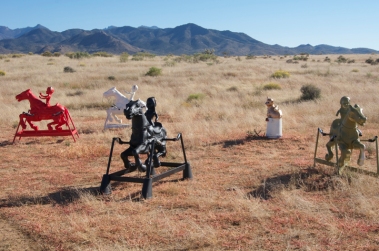 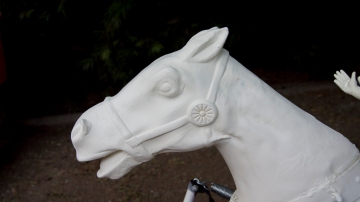 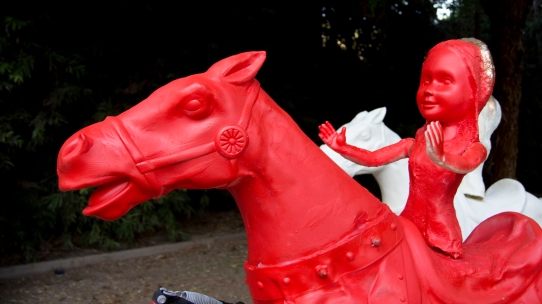 Kingman, Arizona is the perfect location for an I-40 Rest Stop–near the Nevada and California borders, along historical Route 66. Its surrounding communities in Mohave County embody the bizarre juxtapositions of the American West: the nuclear testing grounds of Grasshopper Junction next to the decrepit remains of Santa Claus, a failed tourist destination masking a cynical real estate scheme; the thriving Hualapai Indian Reservation next to fundamentalist Mormon enclaves next to the remains of an intentional hippie community in the otherwise decrepit mining town of Chloride.

I first learned about Kingman when I was warned not to stop there.  In the years between 2001 and 2003, I criss-crossed the country many times; fellow travelers, particularly people of color, would tell me stories–of their own personal bad experiences in the town, of rumors of a large KKK presence in the region.

As I did research, I found that Kingman has long been known as a center of white power activity, drug violence and survivalist culture. It was home to Timothy McVeigh in the years leading up to the Oklahoma City bombing. Dennis Mahon, regional leader of the White Aryan Resistance movement, made national news in 2001 when he very publicly moved his operations to Kingman, a location he thought would be sympathetic to his goals; he was living there where he sent the mail-bombs that recently had him sentenced to 40 years in jail.

These days, Kingman–as are many communities throughout Arizona and the American West–is home to communities of Preppers–survivalists who actively prepare for apocalyptic disaster–as well as white power, militia, and pro-gun activity. It seems that looming large in the social imaginary of these movements is the idea that the End of Days is imminent, itself is yoked to the yearning for a past that never was, an “ideal land” played out in historical nostalgia—Route 66 diners, re-enactments of old West “shoot-outs” in the ghost town of Oatman.

My Doomsday Crèches are an outsider’s attempt to engage in discourse with a location that expects me to simply pass through.

Some of the images used in my research 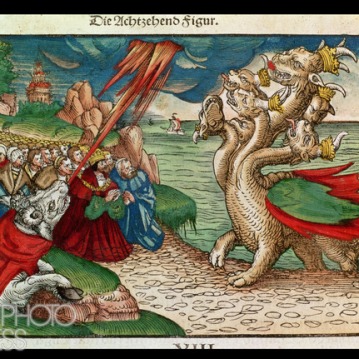